You are here: Home > The Modern Trombone with John Kenny

The Modern Trombone with John Kenny 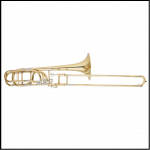 Trombonist, composer and actor - John Kenny has performed and broadcast as a soloist in over 60 nations as an interpreter of contemporary, jazz and early music.
Since 1983 he has been musical director of the TNT Theatre Company and American Drama Group Europe, collaborating with director Paul Stebbings in productions which have toured every continent except Antarctica. In 1993 he became the first person for 2,000 years to play the great Celtic war horn known as the Deskford Carnyx, developing a repertoire for this rediscovered voice that can be heard on eight CDs, as well as in the concert hall and on film, television and radio.

He is regularly invited to give masterclasses and lectures at conservatoires and universities throughout Europe, the USA and Asia. In 2017 he was the recipient of the International Trombone Association Lifetime Achievement Award, one of only two British players ever to have been accorded this honour.

Add this to Calendar