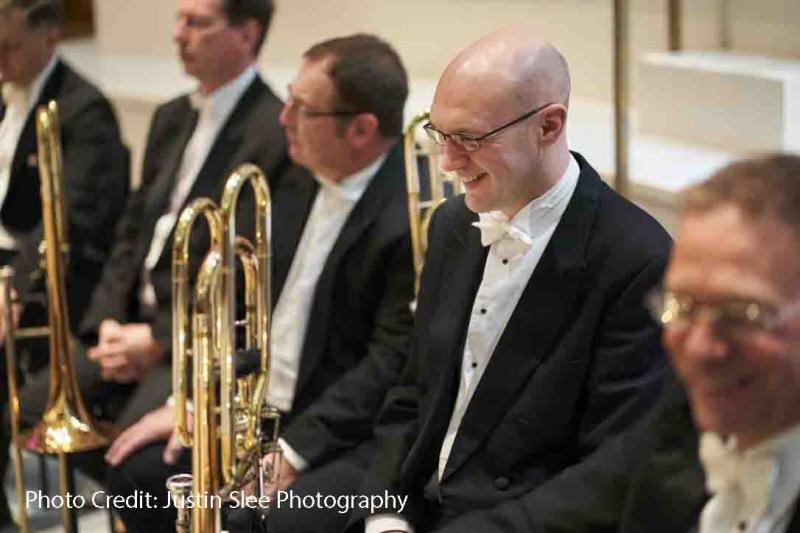 Throughout this week we have been showcasing our award winners for the British Trombone Society Annual Awards 2021!

Our final award winner, as voted by the membership of the British Trombone Society is the incredible Christian Jones. Our 2021 Trombone Teacher of the Year! Congratulations, Christian! 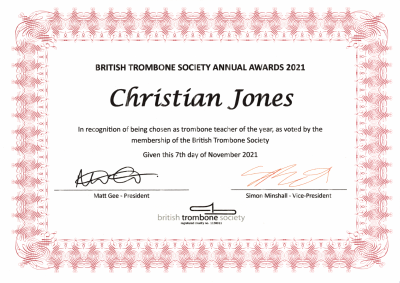 Christian was appointed to the BBC National Orchestra of Wales in 2001, aged twenty, and graduated from London’s Royal Academy of Music with first class honours the following year. A month later, he joined the Philharmonia Orchestra, London and spent a decade recording soundtracks such as Resident Evil: Apocalypse and performing around 150 concerts annually in venues from Sydney Opera House to Carnegie Hall. Highlights included Messaien’s Turangalîla conducted by Esa-Pekka Salonen, Verdi’s Requiem under Riccardo Muti, a Mahler symphony cycle with Lorin Maazel and Beethoven’s Symphony no. 5 in Bonn which launched the career of last-minute substitute Gustavo Dudamel.

Since relocating to Yorkshire in 2012 with wife, Hallé Principal trombonist Katy Jones, and their young family, Christian has been delighted to discover operatic repertoire from Puccini’s Turandot to Wagner’s Ring Cycle with the Orchestra of Opera North.

Tutor at the Royal Northern College of Music since 2015, Christian also coaches regularly with the Brass Academy and the National Youth Orchestra of Great Britain. He served as President of the British Trombone Society 2013-15, appearing as the mystery guest on Chris Evans’s BBC Radio 2 breakfast show before 9.8 million listeners!

Christian’s YouTube channel, launched in 2017 as a study aid for students, currently features over 80 videos of solo works, technical advice, and orchestral and operatic excerpts. He is currently using the footage as part of a Master’s degree in performance at the RNCM.

In October 2021 Christian gave the world premiere of Gresley, accompanied by the Orchestra of Opera North. The occasion marked the fulfilment of a 25-year-old ambition, held since playing in the National Youth Orchestra together, to commission Benjamin Ellin to write him a bass trombone concerto. It would not have been possible without the support of Opera North, The RVW Trust, instrument sponsors Conn-Selmer, and above all, Christian’s family and friends.

Away from music, Christian can usually be found walking, running, cycling & swimming in his beloved Peak District!