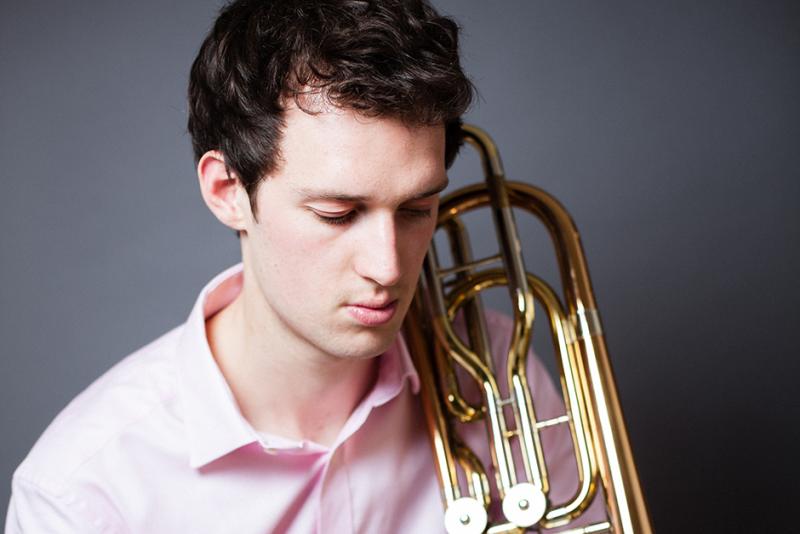 Emerging as one of the UK’s most exciting young musicians, he is the only brass player ever to win the Gold Medal of the Royal Over-Seas League competition, receiving acclaim from international soloists including baritone Jonathan Lemalu, oboist Nicholas Daniel and pianist Piers Lane. James has won first prize in the British Trombone Society Bass Trombone competition and the Drummond Sharp Prize for Brass at the Royal Academy of Music.

He performs regular recitals across Europe, from Lucerne to London, and celebrates his passion for modern music, commissioning solo and chamber pieces for his instrument and recently giving the world premiere of a new concerto with orchestra.

James has been a member of the European Philharmonic of Switzerland since its founding in 2015 and has performed as guest principal with renowned orchestras across Europe, including the Orchestre de la Suisse Romande, Hallé, London Sinfonietta, and London Symphony, as well as at the Royal Opera House and English National Opera. In addition to his position at the Philharmonia, he is a current member of the Gustav Mahler Jugendorchester and a former member of the European Union Youth Orchestra.

Beyond the world of classical, James can be heard regularly in London's West End, playing in musicals including The Lion King, The Phantom of the Opera and 42nd Street.

Having graduated from the Royal Academy of Music with First Class Honours in July 2015, James is now studying on a Performance Masters specialised for soloists at the Hochschule der Künste Bern, in Switzerland. He is the first bass trombone player to be accepted onto the course and is tutored by world-renowned trombonist and pedagogue Ian Bousfield.

(Reproduced by kind permission of the Philharmonia Orchestra. Click here to read the original article)