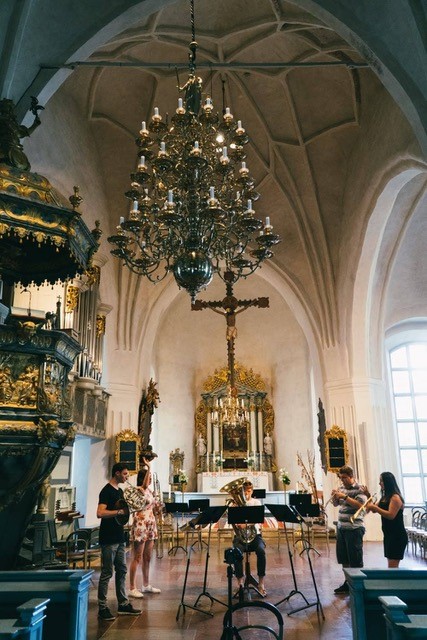 For those with an interest in brass chamber music the name Stockholm Chamber Brass will be a familiar one. Formed over 30 years ago, the group have gone on to be one of the few internationally recognised brass quintets and have recorded and performed extensively across the world. Four years ago the group made the decision to form the ‘Stockholm Chamber Brass Academy’: a week long intensive course for brass chamber groups from across the world. Each year the course invites five brass ensembles and this year my brass quintet, W1 Brass, were fortunate enough to have been chosen for their summer course in July 2019.

On Sunday, 28 July we arrived in the picturesque city of Leksand, Sweden on the southern shore of Lake Siljan. We were quickly made to feel welcome by the fantastic members of Stockholm Chamber Brass (SCB) and were introduced to the other brass ensembles participating in the course. This year there were musicians and composers from Germany, Italy, USA, UK, Slovenia, South Korea, Japan, France, Denmark and Switzerland. After a quick overview of the week ahead we were introduced to trombonist and composer Mike Svoboda who would be leading the compositional element to the SCB Academy.

Very early on in the development of the quintet, SCB made the active commitment to seek out commissions from new and established composers alike, in order to enlarge the amount of original repertoire for brass quintet. The first commission was made in 1990 and since then over 40 compositions have been written or the group. Through the constant programming and recording of these works, many of the SCB commissions have gone on to become the most frequently performed original works for brass quintet around the world. Notable composers to write for the group include Anders Hillborg, Sven David Sandström, Karin Rehnquist, Christian Lindberg, Eino Tamberg and Piers Hellawell. 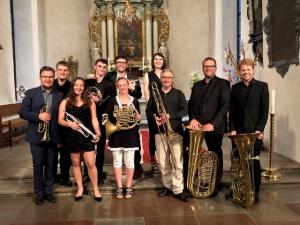 So to continue this interest in original compositions for brass groups, the SCB Academy invites five composers to the summer course to compose and work on a composition for brass ensemble. Each composer is allocated a brass ensemble and along with Mike Svoboda and the members of SCB they develop the music before a world premieres concert at the end of the week.

After coming to Germany from America in the 80s, Mike Svoboda spent eleven years working as trombonist and assistant with Karlheinz Stockhausen. He has premiered over 400 works for trombone at major festivals throughout the world and at current is professor for contemporary music and trombone at the University of Music in Basel, Switzerland.

As well as performing, Mike is a very active composer and has received commissions from festivals and opera houses such as the ECLAT festival, The State Opera Hannover, The National Theater Mannheim and the State Opera in Stuttgart. In 2008 he was awarded the Praetorius Prize for Innovation in Music from the German government, because of, according to the jury, the ‘influence and recognition his concepts and ideas have had on the development of music and its performance.’

With new music comes new techniques to be learnt, and during our first day at the Academy we were introduced to these techniques by Mike in a workshop. We were shown how to do multi-phonics, create a ‘double buzz’ and how we can change the colour of the sound to best fit what we are playing.

To end our first day at the Academy we attended a concert by SCB, Mike Svoboda and Joakim Agnas in the beautiful Leksand Church. SCB performed a program of classic quintet repertoire including the Malcolm Arnold Brass Quintet as well as a performance of music by Hildegard von Bingen and text by Magnus Florin. Mike Svoboda then performed two original compositions: Hommage a Badesaison for Conch Shell and Zugserscheinungen for trombone solo. The concert concluded with Oskar Böhme’s Trumpet Sextet which featured SCB and trumpeter Joakim Agnas. The concert was a fantastic way to end our first day in Sweden and we were all incredibly excited to begin rehearsing with SCB the following day.

Each day at the SCB Academy begins with an hour long warmup session tailored for your instrument. Our leader for the trombones was Jonas Bylund who is one of the founding members of SCB. After completing his studies at the Stockholm State Academy of Music, Jonas became principal trombonist of the Oslo Philharmonic Orchestra. He has also held principal positions with the Bavarian Radio Symphony Orchestra, the Royal Philharmonic Orchestra Stockholm and the Bamberger Symphoniker. He has appeared as a soloist with a number of Europe’s leading orchestras and has performed at festivals all around the world. Since 1995 Jonas has held the position Professor of Trombone at the prestigious Hochschule für Musik und Theater in Hannover.

Every trombone warmup began with breathing exercises and stretches to get us ready for the day ahead. Jonas introduced us to the idea of sighing (breathing), spitting (the tongue) and throwing (the slide) and we worked through exercises involving glissandos, scales, lip flexibilities and singing.

Every group at the SCB Academy gets the opportunity to perform in a public Lunchtime Recital and my brass quintet was chosen to perform in the first concert on Monday. We performed a programme consisting of music by Jevitc, Tilson-Thomas and Agnas. Immediately after the concert we had a feedback session with SCB and the other Academy participants, which was an incredibly helpful experience as the concert was still fresh in everyone’s minds and allowed us to reflect fully on what we had just played.

We then went straight into chamber music coaching sessions with the members of SCB. Each group had ten hours allocated to them for the week meaning two hours with each member of SCB. These sessions were invaluable as we were able to discuss music that was written for SCB and get insights into how it composed which then helped us then to shape our own interpretations of the music.

One of the many benefits of attending the SCB Academy is that each player gets a minimum of 90 minutes individual teaching with a member of SCB. I was fortunate to have two lessons with Jonas Bylund, which was incredibly interesting and enriching. We worked on solo repertoire and orchestral excerpts in my lessons and discussed how I could improve my musical phrasing. We discussed how to approach an audition situation and how to effectively overcome psychological barriers that may be holding back my playing. Overall I found the lessons incredibly helpful and enjoyable.

In the evenings, SCB organised workshops for us where we could ask questions about the formation of Stockholm Chamber Brass, how they structure their rehearsals and how they choose their repertoire. These workshops gave us a real insight into how they developed as an ensemble and how we as individuals and as members of our own groups can improve and progress in the future. We also had many opportunities to listen to SCB rehearse which was fantastic as we got to see how efficiently they used their limited practice time and what they prioritised.

Every day we had time allotted to us with our composer. Our composer was Jan Flessel, who composed Rain, for brass quintet, audio and video playback. The piece made use of many extended techniques such as slap tongue as well as more obscure actions such as filling our instruments with water to replicate the sound of rain! Along with Mike Svoboda and Urban Agnas, we worked to develop this piece and tailor it for our quintet. We performed Jan’s piece on Saturday as part of the world premieres concert which was a great chance to hear what the other brass ensembles and composers had been working on all week.

On Friday, 2 August we travelled to Siljansnäs Church to listen to Stockholm Chamber Brass perform another concert with Mike Svoboda and Anne-May Krüger which was a great example of how to programme classic quintet repertoire such as Victor Ewald’s Brass Quintet No. 3 alongside Svoboda’s realisation of music by Karlheinz Stockhausen for brass quintet and trombone solo.

The course concluded on Saturday with a joint concert at Leksand Church where each brass ensemble got to show what they had worked on during the week. The concert concluded with massed performance by all the quintets and Stockholm Chamber Brass.

The Stockholm Chamber Brass Academy is a fantastic course and I urge anyone with an established brass ensemble to apply next year. Don’t have an ensemble? Don’t worry! You can also apply as an individual and you will join four more individuals to form a quintet of musicians from across the world.

For more information on the course and Stockholm Chamber Brass, click here.

To hear and see what it is like to participate in this course please visit W1 Brass on Facebook by clicking here.