You are here: Home > About > Officers & Staff > Committee

The distinguished jazz trombonist and first trombone with the BBC Big Band is the Society's Honorary Patron.

Born in Berwick upon Tweed in the Scottish Borders, Gordon started playing Trombone at the age of 12 and at the tender age of 15 joined the Army as a Junior Bandsman in the Staff Band of The Royal Corps of Transport. He spent 2 years at the Junior Musiciansʼ Wing of the Guards Depot at Pirbright and 9 years as 1st Trombone with the Royal Corps of Transport Band in Aldershot where he reached the exalted rank of Corporal.

In 1978 Gordon left the Army to join the legendary BBC Scottish Radio Orchestra under the direction of Brian Fahey where he was lucky enough to work with the great Ella Fitzgerald. The Orchestra was made redundant in 1980 and after a couple of years as freelance in Scotland, playing with the BBC Scottish Symphony, Scottish National Orchestra and Scottish Opera, he moved to London.

Gordon was appointed Lead Trombone in the BBC Big Band in 1984 and has worked with many great musicians and artists during his tenure including Billy May, Les Brown, Ray Anthony, Bob Florence, Bob Brookmeyer, Bobby Shew and Bill Watrous.

In 1986 while playing with Sarah Vaughan and the BBC Scottish Symphony Orchestra conducted by Robert Farnon at the Glasgow Jazz Festival Gordon played a Trombone solo which was heard by the great Benny Carter. Benny loved Gordonʼs playing and wrote a piece of music especially for him called “DN” which was played in the concert on the following evening by Gordon and an all star Scottish Big Band.

Gordonʼs unique sound has been in great demand over the years in the orchestras of Robert Farnon and John Wilson and the Big Bands of Laurie Johnson, Laurie Holloway, Kenny Wheeler and Alan Ganley.

The Committee meets monthly through teleconferencing and supports the aims of the British Trombone Society through its work at national and regional levels. 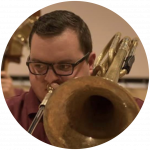 Simon is a London based freelance Bass and Contrabass Trombonist. A graduate of the Royal Academy of Music, Simon can be heard playing in all musical genres, from the likes of the Royal Philharmonic Orchestra, to the Ronnie Scott’s Big Band. He has been an active member of the BTS for over 17 years. 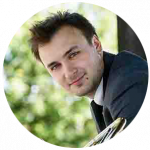 Matthew has been Principal Trombone with the Royal Philharmonic Orchestra since 2010. Following this appointment he gained principal positions with the Aurora Orchestra and the brass septet Septura. He is also on the teaching faculty at the Royal Academy of Music and is an active soloist. His passion for the trombone has driven him to release two solo albums Paradiso e inferno, and Matthew Gee’s Amazing Sliding Circus. Both of these concept recordings address stereotypes associated with the instrument, with the express aim of introducing audiences to the beauty, expressiveness, and flexibility of an instrument often overlooked. Matthew has performed with orchestras and ensembles all over the world, including the Vienna Philharmonic Orchestra, Klangforum Wein, the Chamber Orchestra of Europe, the London Symphony Orchestra and the Academy of St. Martin in the Fields and has recorded and appeared in many films and television scores. 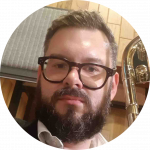 As a performer, Jon has worked with artists such as Quincy Jones, Tony Bennett and Jamie Cullum. He also appears regularly with the John Wilson Orchestra and the Heritage Orchestra. Jon teaches at Westminster School and delivers classes and workshops all over the country. 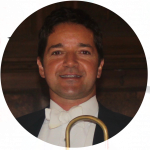 Tom was the first full-time student of the sackbut at the Royal College of Music and since then has worked with all of the specialist period instrument ensembles and on dozens of productions at Shakespeare’s Globe. He is a founder member of the English Cornett and Sackbut Ensemble, and on the sackbut he has recorded with Paul McCartney at Abbey Road and for a number of films including Shrek the Third and Pride and Prejudice, in which he appears in the film playing an 18th century trombone.

Matthew has been Principal Trombone with the Royal Philharmonic Orchestra since 2010. Following this appointment he gained principal positions with the Aurora Orchestra and the brass septet Septura. He is also on the teaching faculty at the Royal Academy of Music and is an active soloist. His passion for the trombone has driven him to release two solo albums Paradiso e inferno, and Matthew Gee’s Amazing Sliding Circus. Both of these concept recordings address stereotypes associated with the instrument, with the express aim of introducing audiences to the beauty, expressiveness, and flexibility of an instrument often overlooked. Matthew has performed with orchestras and ensembles all over the world, including the Vienna Philharmonic Orchestra, Klangforum Wein, the Chamber Orchestra of Europe, the London Symphony Orchestra and the Academy of St. Martin in the Fields and has recorded and appeared in many films and television scores. Originally from Windermere, Cumbria, Alison studied librarianship at Robert Gordon's in Aberdeen and held a variety of posts including District Cataloguer for Moray & Nairn Library in Scotland and Mobile Librarian for Norfolk County.

Now retired, Alison plays bass trombone in two orchestras and a brass band. Other hobbies include sailing, spinning and weaving. 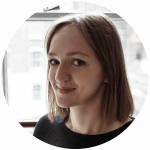 Jane is a London-based trombone player, who performs with various professional theatre and orchestral companies across the country. Jane holds prestigious teaching positions including St Paul's Cathedral School and Guildhall Young Artists' "Centre for Young Musicians" and has worked on a variety of outreach projects with the education departments of the Royal Opera House, London Symphony Orchestra and Academy of St Martin In The Fields.  Jane is a graduate of the Guildhall Schools of Music where she studied for her undergraduate degree and continued as an Artistic Fellow of the School for both 2016 and 2016. Originally from Aberdeen and now based in London, Adam studied bass trombone and bass sackbut at the Guildhall School of Music & Drama. Since graduating, Adam has enjoyed working in many different musical areas, from orchestral work with The Orchestra of The Royal Opera House, BBC National Orchestra of Wales and Royal Northern Sinfonia, to various theatre shows in London’s West End and Shakespeare’s Globe, and period recording & performing projects with Il Giardino Armonico, The English Cornett & Sackbut Ensemble and His Majesty’s Sagbutts & Cornetts. 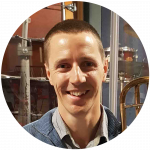 Jonty Hill is the Principal Trombone of the Royal Air Force Central Band and is the Lead Trombone with the Royal Air Force Squadronaires Big Band. He graduated from the Royal College of Music in 2007 and as a freelance trombonist has performed with the English Chamber Orchestra, the BBC Concert Orchestra and commercially alongside singers such as Cliff Richards, Mick Hucknall, Martin Shaw, Carol Kidd and Claire Martin.

He performed at the world famous Ronnie Scott’s jazz club with the late great trumpeter Derek Watkins and in October 2014 recorded Gordon Langford’s Rhapsody for Trombone for the Chandos Record label. He has been a featured soloist on both trombone and classical guitar at the Royal Albert Hall with the Central Band and in 2018 performed live on the Chris Evans breakfast show on BBC Radio One to an audience of 10 million people. 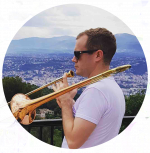 David studied at Kingston University & Trinity College of Music, since graduating his CV highlights include performing with; Take That, Omar, Yolanda Brown, Peter Andre, Martha Reeves, Moscow City Ballet among many others.

Also an active educator, David holds teaching positions at Hampton School, Tiffin Boys school and Surbiton High School.  David is director of The London Street Band Ltd who have performed all over the world and appeared on many TV shows. 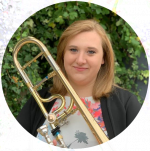 Becky studied at Birmingham Conservatoire, gaining a BMus(hons) on trombone under Bob Hughes (London Symphony Orchestra) and Ed Jones (CBSO). She has since gone on to gain her LRSM performance diploma and the Trinity Certificate of Music Education.

In demand across the Midlands as an educator and performer, Becky is currently the low brass specialist at the Elms Junior School and a tutor with the Birmingham Schools Concert Orchestra. She is the author of the book  'Music for Children'  and throughout lockdown has built up an online teaching studio as well as the online store Trumpet_Trombone, selling teaching and practice resources and arrangements. She is an Edwards Featured Artist and plays on a T350-CRE with a custom rose-brass bell. 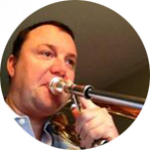 Adrian Taylor works as a professional trombonist, conductor, instrumental teacher and composer/arranger based in the Midlands. He is a founder member of English Trombone Consort and conductor of Birmingham Schools' Wind Orchestra (run by Services For Education). Many of his arrangements and compositions have been published by Warwick Music and two of his trombone study books are on the ABRSM trombone syllabus. Adrian has often played a leading role in BTS days, rehearsing his own arrangements for the massed blows or conducting the wind orchestra to accompany soloists. 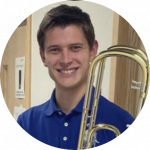 Tom Pilsbury started playing trombone at age 12 and later studied undergraduate and postgraduate courses in bass and contrabass trombones at the Royal Birmingham Conservatoire under Bob Hughes and David Vines as well as tuition from other trombonists such as Christopher Houlding, Christian Jones, Richard Watkin and Keith McNicoll. Tom has also performed with orchestras such as the City of Birmingham Symphony Orchestra and the New English Concert Orchestra.

An active and self-published arranger, Tom writes arrangements from solo to large brass ensemble and has had arrangements performed at the BBC radio brass prize, the BTS Bob Hughes Bass Trombone Competition and by the CBSO brass ensemble. 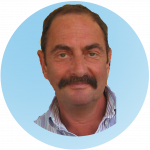 Born and educated in London and studied at Trinity College of Music and Hull University, Geoff has lived in East Yorkshire (Hull, Beverley and now Hutton Cranswick) for over 50 years.

He worked as a teacher in Sheffield and Hull and as an education adviser to the East Riding of Yorkshire School Advisory Service. Now retired but still playing bass trombone (Edwards) in various groups, brass quintet, swing band and orchestra. Has one son, a professional horn player and a very tolerant wife.

Now extremely old, but hoping to become even more so!