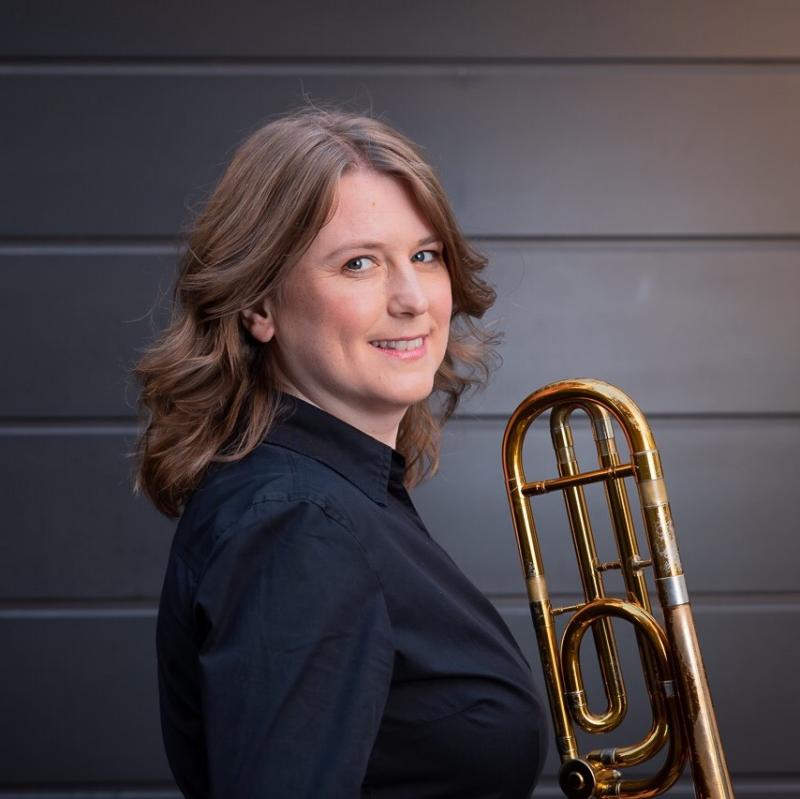 The BTS is proud to present our Player of the Year Award 2022 to Helen Vollam. 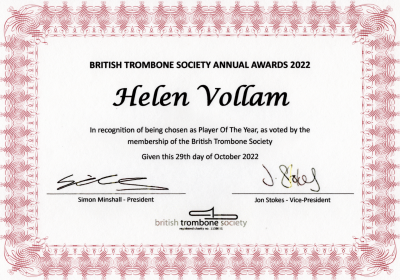 Helen studied with Eric Crees, Simon Wills and Denis Wick. She was Principal Trombone of the European Union Youth Orchestra and won the Bronze Medal in the 1995 Shell/LSO Music Scholarship. In 2003 she won the Woodwind & Brass Award and Philip Jones Memorial Prize in the Royal Over-Seas League Music Competition, becoming the first ever trombone player to reach the competition’s final.

Helen has performed with most of the UK’s orchestras and further afield with Spira Mirabilis and Deutsche Kammerphilharmonie. She has toured worldwide and has worked with conductors and artists such as Haitink, Giulini, Boulez, Harnoncourt, Abbado, Nézet-Séguin, Oramo, Bychkov, Ozawa, Rattle, Previn, John Adams, John Williams, Bryn Terfel, Joyce DiDonato and Monty Python.

In demand as a guest teacher, Helen has given classes throughout the UK including at the Guildhall School of Music and Drama, Royal Academy of Music and Royal Conservatoire of Scotland. She is Visiting Artist in Trombone at the Royal Birmingham Conservatoire. She was on the Artist Faculty for the 2017 Dublin Brass Week and has adjudicated for BBC Young Musician, Royal Over-Seas League, BBC Radio 2 Young Brass Award, British Trombone Society, International Trombone Association, Swisstbone and Ian Bousfield Getzen competitions.

Helen has played on many film, TV and video game soundtracks, including Star Wars: The Attack of the Clones, three Harry Potter films, Inception, Iron Man 2, Brave and No Time to Die. Many of her trombone ensemble arrangements are published through Bones Apart Publishing. In 2017 Helen was the recipient of the British Trombone Society's Sheila Tracy Award for 'significant contribution to her field'.

In 2019 Helen gave the world premiere of Gavin Higgins' new trombone concerto Book of Miracles, written especially for her, with the BBCSO at the Barbican. In 2020 she performed and recorded Mabuika! by Shirley Thompson which was written for her as part of the BBC Radio 3 Composer Postcards series.