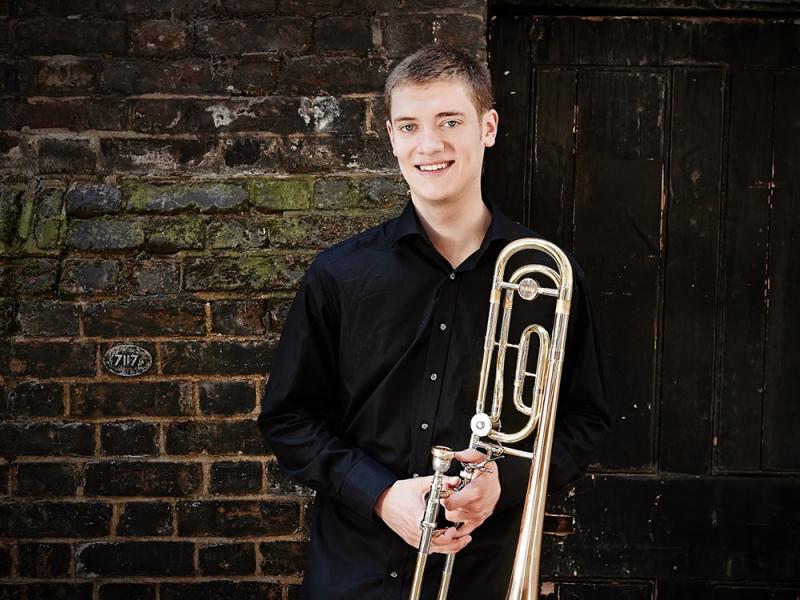 The celebrated musician will join the School's Wind, Brass and Percussion department in Autumn 2019

Guildhall School of Music & Drama is delighted to announce that Peter Moore, leading international trombone soloist, has been appointed Professor of Trombone in the Wind, Brass and Percussion department, starting in the 2019 autumn term.

Peter Moore says: “I’m excited to get started in my new role at Guildhall School. There is a huge wealth of talent and a great spirit within the brass department.”

In 2008, at the age of 12, Moore became the youngest ever winner of the BBC Young Musician Competition. At the age of 18 he was appointed co-principal trombone of the London Symphony Orchestra and in 2015 joined the BBC Radio 3 New Generation Artist scheme.

Highlights over the last year have included his US debut at the Spoleto Festival in Charleston and solo tours of China and Colombia. In 2018 Rubicon released his first solo CD with pianist James Baillieu. During the 2018/2019 season Moore gave the UK premiere of James MacMillan’s Trombone Concerto with the London Symphony Orchestra at the Barbican Centre, London.

As a soloist he has appeared with the London Symphony, BBC Symphony, BBC Philharmonic, BBC National Orchestra of Wales, Ulster Orchestra, Thailand Philharmonic, Barcelona Wind Symphony and Lucerne Symphony orchestras, among many others. He has given international recitals in venues including Wigmore Hall, Musikverein, Royal Concertgebouw, ElbPhilharmonie, Barbican Centre, Hay-on-Wye Festival, the BBC Proms, in Melbourne Australia and Kumho Art Hall Yonsei in Seoul.

Moore was selected by the Young Classical Artists Trust in 2014. He is a Yamaha International Artist.